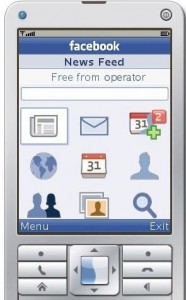 Facebook has released an app for featurephones to complement m.facebook.com, this makes perfect sense and might just be the biggest source of growth in The Social Network in 2011. Given the ease with which such a java app can be hacked together and configured for a vast array of mobile devices, I do wonder what took them so long to get around to this.

Featurephones remain the largest mobile market segment in terms of sales and use. Though the migration from dumbphone to smartphone is well underway, the harsh economic reality is that the majority of consumers cannot afford to upgrade and won’t be able to for some time to come.

Many of the tabloid tech blogs would have you believe that sub $100 smartphones will be pervasive in the market by the end of 2011. That may be true but thinking globally, which tabloid tech blogs rarely do, the average retail price of mobile phone floats between $45 and $50. That price is less than the baseline factory-gate cost of a theoretical Android smartphone that retails at $100. Factor in the legacy device life-cycle and the largely ignored refurbished phone market and, well, sorry folks, expect featurephones to be with us for a while yet.

So why a Facebook app when m.facebook.com is already doing a great job of servicing the needs of this market? I suspect a few reasons:

New Facebook registrations have reached a plateau in mature western markets, searching for growth a featurephone app is a superb idea, though perhaps not the right strategy for everyone.