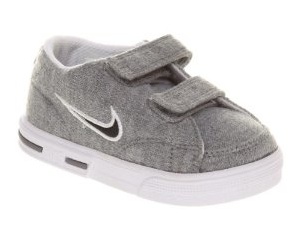 Ars Technica has written up a great piece on AVG’s preschooler technology report. According to the results of the survey, kids are better at navigating the iPhone than they are at doing up their shoelaces. This is probably not news to any parent who has ever asked their child to put down the PS3 for a few minutes and tidy their room. Like doing up your shoelaces, housework is boring.

After every major holiday festival (think Thanksgiving or Christmas) it’s common to see a flurry of tweets and posts bemoaning the perennial problem of being the only geek in the family: how I helped mum get Skype installed; how I rebooted Dad’s router; how I got Gran on Facebook. Given our exasperation over the older generation’s lack of skillz, why are we disappointed when we find that our children have a natural aptitude for the technology they’re growing up with?

This is the kind of natural evolution that would get Kurzweil’s approval. We should be pleased that generation Z will live a hyper-connected, and fully augmented life. I for one will be only too happy for my son to run from the command line before he can sew on a button or darn his socks, I know which of these three skills will be the most valuable for him.

The writers at Ars Technica (and The Daily Mail) can tut tut at the state of things today and settle into their slippers with some cocoa and a newspaper, I’ll nip out and buy some velcro-laced slip-ons for the kids.

Bashing the One Laptop Per Child (OLPC) organisation’s utopian ideals seems to have become something of a sport, and an uncharitable one at that. Details of some supposed transgressions are documented at the OLPC wiki, on a very scrollable page labelled: Controversies. Many relate to the typically asinine politics one would expect to find in any overly academic NGO email inbox or FOSS forum; some are valid criticisms; most have a factual basis; and an overwhelming proportion seem to have issues with OLPC Chairman and Founder, Nicholas Negroponte.

In “The Rise Of The New Global Elite” Chrystia Freeland writes of Philanthrocapitalism:

“What is notable about today’s plutocrats is that they tend to bestow their fortunes in much the same way they made them: entrepreneurially. Rather than merely donate to worthy charities or endow existing institutions (though they of course do this as well), they are using their wealth to test new ways to solve big problems.”

Freeland goes on to quote Matthew Bishop, co-author of the book Philanthrocapitalism, as he describes the phenomenon of the less than ragged-trousered do-gooder to her:

Operating on a grand scale, to a massive vision, seems to have been what OLPC was all about and the organisation has not been found wanting where it comes to making sweeping statements of intent that have then been corrected by the realities of the project.

For the naysayers knocking OLPC this appears to be fish-in-a-barrel territory.

Well, I’ll make no bones about it, despite the inauspicious retelling above, I come not to bury but to praise. Let me  start by saying: What successful entrepreneur doesn’t make outrageous statements of future intent and set tough targets? If it was easy to offer millions of children cheap laptops, everyone would be doing it (although in leading the way, OLPC has made it easier for followers).

So, what has OLPC achieved in the last half decade? In no particular order:

Want to get excited about OLPC all over again? Watch this excellent interview with OLPC CTO Ed McNireney at the 2011 Consumer Electronics Show.

To the naysayers, before you hang me, I agree: Nicholas Negroponte sometimes says things which make him sound like a dick, don’t we all. But what we don’t do is keep the money rolling in, he does. I agree that hardware is the trivial part, investment in teacher training, connectivity, specialised curriculum development and maintenance is the difficult bit, but unless the goal changes to One Library Per Child the hardware has to come first.

It seems to me that many of the most vocal critics, especially those involved in related projects, have more of an issue with Negroponte’s Philanthrocapitalism than they do with the aims of OLPC. Airing these issues  under the pretence of constructive criticism is a classic passive aggressive behaviour that OLPC, and the world’s vulnerable children, could well do without.

And here’s the real roadmap announced in 2009, it’s pretty much on track: 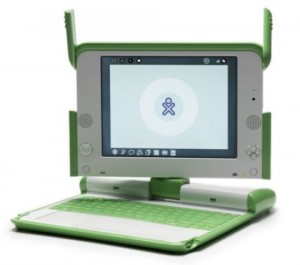 XO 1.75 – The XO 1.75, to be available in early 2011, will be essentially the same industrial design but rubber-bumpered on the outside and in the inside will be an 8.9”, touch-sensitive display. The XO 1.75 will be based on an ARM processor from Marvell that will enable 2x speed at 1/4 the power and is targeted at $150 or less. This ARM-based system will complement the x86-based XO 1.75, which will remain in production, giving deployments a choice of processor platform.”

XO 3.0 – The XO 3.0 is a totally different approach, to be available in 2012 and at a target price well below $100. It will feature a new design using a single sheet of flexible plastic and will be unbreakable and without holes in it.