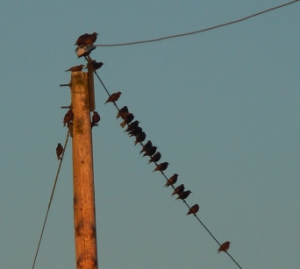 May 1st 2011 will go down as one of the biggest news days of the year. According to the San Francisco Chronicle this was Twitter’s CNN moment.

Twitter is a powerful medium for broadcasting, curating and consuming news; a vanity mirror for all kinds of celebrity; a sounding-board for desperately earnest marketers and consultants; a search and discovery tool for stalkers; an obvious measure of influence; and arguably, a catalyst for social change (although not always the good kind). In brief: it’s important.

As May 1st wrapped around to May 2nd @twitterglobalpr was keen to tell us that usage had peaked at an all time high of 5,000+ tweets per second during Obama’s televised announcement of Bin Laden’s death. If that sounds like busy to you, think again. How busy does a mobile network Short Message Service Centre get on any New Year’s Eve? Or Diwali? Or Eid? I can guarantee you that the magnitudes of messaging are much greater and the service more robust. 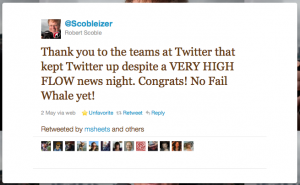 I’ll gladly join Scoble and offer my congratulations to Twitter for keeping up, but I come from a telco world where services must be available to the five nines (99.999%) twenty four hours a day, seven days a week. Staying up doesn’t impress me much – that’s a baseline.  You can say what you like about the Scobleizer but surely he’s a tool better used to trumpet your cool new whatever than he is a notifier of basic competence.

Don’t get me wrong, I am a big fan of micro-blogging and I use Twitter a lot, but it’s a free service and you know, it really does feel like one. An internet age ago Eqentia suggested that Twitter go Freemium to alleviate its growing pains. I agree, as is so often the case ‘free’ is being used as a get out of jail card for a shockingly poor standard of care.

In the absence of anything to sell Twitter has not bought my loyalty with its grace and favour, just my frustration. So like a User I’ll use it while it suits me, if I were a Customer we’d be in a far more valuable relationship.

Until that happy marriage comes to be my prospective partner is just another big fat replaceable pipe.

Edit: Thanks for the handful of emails, yes, the old title of this post (‘None more busy than Twitter’) was indeed grammatically incorrect. This was one of those obscure in-jokes that failed to pay off (a bit like this blog really). Amended accordingly.