Yesterday T-Mobile announced an agreement with Vivox to provide backbone services for the Bobsled Facebook VoIP app, today Skype upgraded its Android app to carry voice over 3G in the US. Strangely enough, in my view, this is further evidence that there are precious few opportunities left for start-ups in Mobile VoIP.

As I explained in a guest post on Mobisights a few weeks ago, the main chance for disruptors to create a market for mobile voice apps has come and gone. Where the wave of enthusiasm broke a handful of players washed-up at the high-tide mark, whilst the flotsam and jetsam of also-rans were sucked back to struggle in the receding surf. Skype, Nimbuzz, Fring and Rebtel have staked a place on the beach. The remainder will sink, or swim on a for a few more miserable years hoping like hell that someone chucks them the lifebelt of acquisition.

So what happened to MVoIP?

Firstly, where once a mighty barrier prevented entry to the arcane world of telecommunication there is now an onramp. Thanks to the great work of API Telephony Providers, such as Twilio and Voxeo, the product formerly known as Voice has become a feature that can be implemented into a web or mobile app by anyone, in minutes.

I don’t believe the oft trotted out web wisdom that Voice is dead, anyone working in telecoms will tell you that talk is not cheap if it’s your principle means of keeping in touch with distant friends and family, but the availability of simply deployed call origination and the growing number of Open SIP projects for iOS and Android are, generally, bad news for the already crowded Mobile VoIP market.

Halfway decent MVoIP apps abound – as common as calling cards and not nearly as useful. Though not dead, in this respect Voice has  certainly lost its value – take a look at Roger Entner’s recently published US market statistics (sourced from Recon Analytics and Nielsen): 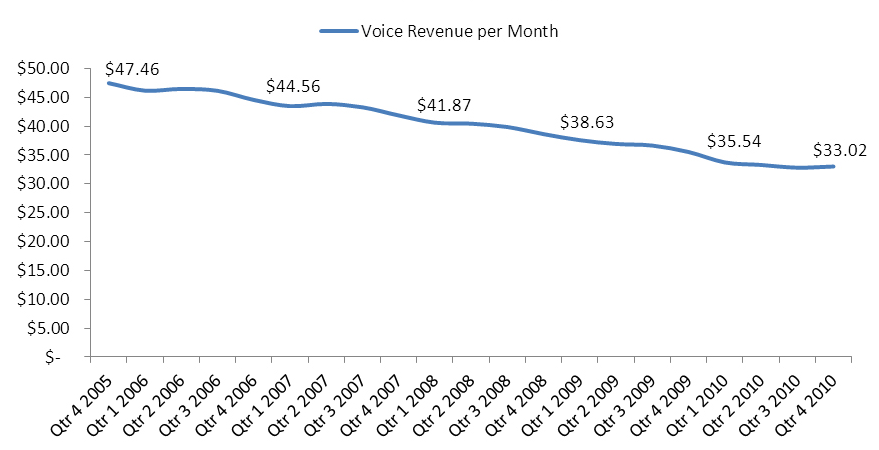 The future of MVoIP is predicated to cheap international calls, mickey mouse messaging and cut-price roaming over WiFi. It’s difficult to see anyone providing more than that in 2011.

Which brings me to my second point. For their products to survive Internet Telephony Service Providers (ITSPs) must differentiate. Nimbuzz and Fring made a virtue of capturing market share by focussing on free Peer-to-Peer calling, Messaging and Social Network aggregation before offering their respective call-out services, others focussed on prepaid Voice first and added Messaging and SNS aggregation later. Either way these little bundles of service are not nearly enough to compete with the likes of Skype, Facebook and Twitter anymore. We’ve moved on.

The ‘future of communication’ is slated to be Unified Communication (UC). I hate this name as it is meaningless to the consumer but thanks to Cisco and the rigorous pursuit of the IMS-powered Rich Communication Suite beloved of Mobile Operators we’d better get used to it. Telcos have defined UC as being all about seamless handling of calls according to Presence, Status and Context. In my view a Consumer UC offering determined on these parameters of perceived need is bound to fail; online human interaction cannot fit into neat little boxes in the same way that my social graph cannot be bound by Facebook’s silo.

At present ITSPs approaching UC product development are aggregating a bunch of services in a spay-and-pray fashion: chuck SNS and Messaging APIs into a super-cooked SIP pot, add some basic voice features and video calls then front the lot with a Phone Book UI – this ‘best effort’ is far too simple to succeed.

For all the flak Color has caught, their open photo-sharing app contains more of the elements of a visionary UC product than most anything I have seen so far this year. Once I understood the potential of Color’s technology in this context and got beyond the pitiful first app the US$41m valuation seemed much more realistic. If the principals have the sense they have been credited with, wait for the iterations.

For a few years before the turn of the decade there was an opportunity for MVoIP companies to ride the wave all the way to the beach. The ferocious rise of the social web, a tsunami if you will, has commoditised Voice to feature status. If you didn’t make it to the shore – it’s time to think of a new idea.