Following Tomi Ahonen on Twitter is always educational and nothing less than entertaining. When he’s on a mission to get a point across it can also be exhausting. Anyone familiar with his tweetstream of consciousness rants, his blog or his books will know that Tomi is a tireless advocate for a truly global view of the mobile industry.

Whilst much of the tech press is dazzled by the sunny Silicon Valley vista where all that matters is iOS and Android, Tomi is knee-deep in the dirt digging up potential nuggets of opportunity that make Facebook Phone stories look like puff pieces for the Amstrad Emailer. Mr. Ahonen knows his stuff.

Having said that, there’s one metaphor that he continues to use which is bugging me and I’d like to correct him if I may.

The iPhone is not Ferrari, Nokia is not Ford, neither is Samsung Toyota. No, the iPhone, and most smartphones, are all mid-range saloons (sedans, if you will). Yes, as Tomi’s statistics state 89% of new phones sold in 2010 cost under USD 250, 45% of the world’s mobile subscribers own a phone costing under USD 50. But if I’m a European mobile customer the free phone offers available from my network operator on a post-paid contract probably look something like this:

All those smartphones are available at 100% subsidy, they’re free. And the offer for an 16GB iPhone 4 from the same operator might look something like this: 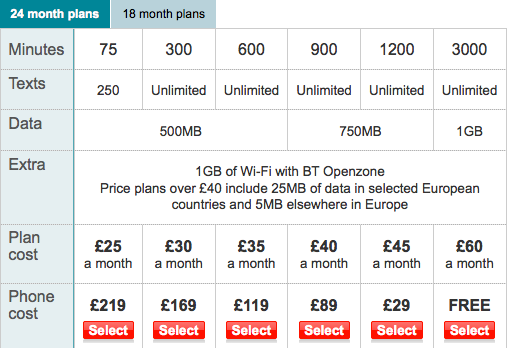 Hardly unobtainable to the average credit card wielding bod. It’s evident that smartphones generally enjoy a parity of affordability and availability to the Western middle-classes. The iPhone is more expensive but for the aspirational consumer it’s not a luxury item anymore. Apple is fast becoming a mid-stream brand.

In the UK,  a new Ford Mondeo costs about GBP 15,000 off the lot. A decent second hand late model Ferrari might be as cheap as GBP 90,000 from a reputable dealer. Sure, using these figures and doing the math the iPhone is a Ferrari. In real life, it’s as affordable as a Sky+ subscription, a flatscreen TV, or an X-Box: not wholly out of the question for many folk. Though way beyond the means of the majority of the world’s phone owners, it’s disingenuous to equate the iPhone with a luxury sports car because it’s not an exclusive item: it shipped 14.1 million units in Q3 2010!

So can we please retire the metaphor? And can you all go out and buy Tomi Ahonen’s latest book? It’s likely to be the most common sense tome on mobile that you’ll read in the next year – unless he publishes another one. 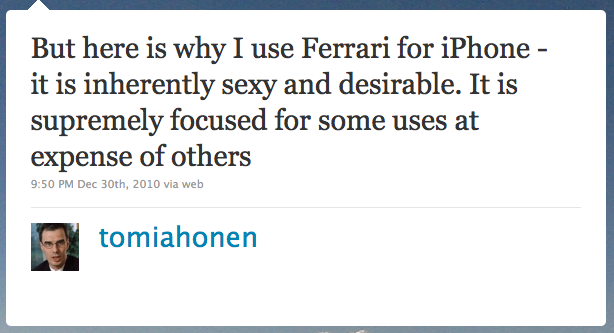 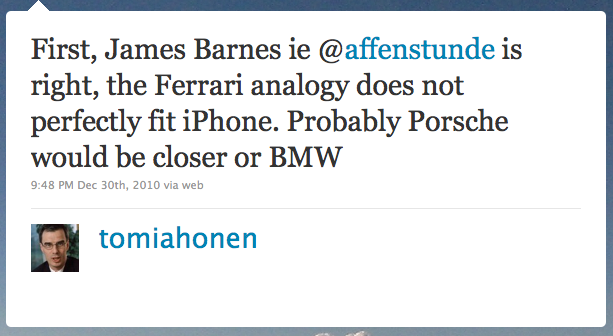 1 Comment → Tomi Ahonen is wrong: the iPhone is not a Ferrari